Changes at GCT & GFC Board level

With the recent departure of Terrence Brannigan from the Board and indeed Chair of Glentoran Football club, the Glentoran Community Trust were delighted to learn that one of the GCT representatives, Stephen Henderson, was subsequently elected by his fellow board members to serve as new Chairman of Glentoran Football Club.

Stephens’ elevation to Chairman means that he must now (in accordance with GFC Articles of Association) become a member of the “Coates Trust”. Whilst Stephen still remains a member of the “Glentoran Community Trust”, as a “Coates Trust” rep we felt he was no longer in a position to represent the GCT, and thus a vacancy had arisen for one of the 2 GCT positions of the board of Glentoran Football Club.

After due consideration, the GCT Board proposed Richard McGuinness as Stephens’ replacement, and this was duly approved by the Glentoran FC board on 12th August 2014.

Just to recap: Richard has been a member of the GCT since inception, and indeed was Chairman of the Trust for a number of years. Richard’s professional career brings to the table considerable experience in the telecoms sector, project management and finance, and whilst we are reluctant to lose him from the GCT Board, we are in no doubt he will prove a valuable asset alongside John Moore on the board of Glentoran Football Club. Richard’s primary role at the club will be on the finance committee. 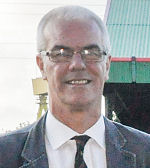 As a further consequence, the GCT Board we’re now also minus a member, and in advance of the next GCT Annual General Meeting the GCT Board have moved to co-opt Ray Cordner as Richards replacement. Ray was already a GCT member and has been very supportive of the Trust in all that we do. We’re delighted to have him on board, and indeed he has already proved a very worthy addition to the team as we work on a number of projects we are hosting in the coming months.

Rays position as a GCT Board member will need to be approved by the GCT membership, should he choose to run for election at the next AGM.