“HELP ME MAKE IT THROUGH THE FIGHT” 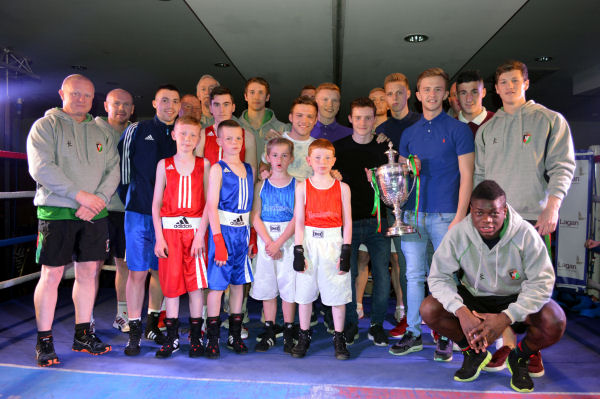 All the fighters, together with Glentoran II’s and the George Wilson Cup

I’ve seen many great people do many great things for Glentoran Football Club over the last four decades, but I can honestly say that I’ve never seen anyone spill their own blood for the cause. That was up until a couple of months ago when a unique calibre of player and supporter stepped into the boxing ring to literally fight for the continued existence of the club they love. Within the membership of the Glentoran Community Trust we have always tried to take a unique and novel approach to fund raising and event organisation and so a year previously the seed for “Judgement Day in Moneyreagh” had been planted on a balmy summers evening in Dungannon when I watched one after another the whole of the Dungannon Rugby Club’s first team XV step into the boxing ring to batter the bejeasus out of each other to raise funds for their own club. I watched in awe as these fit healthy and up until them seemingly mentally sound big lads stepped though the ropes to the scream guitar riffs of AC/DC the bullet like lyrics of Eminem and in one instance the hee haw, hee haws of Dominic the Donkey. 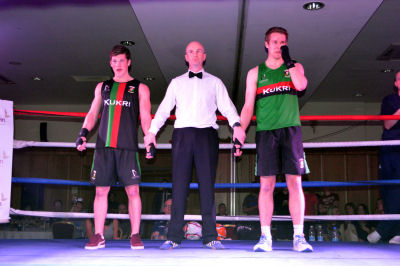 But all around the ring, funds were being raised. The fights were sponsored by local companies, the ring cards, the event programme, the burgers being cooked on the barbeque outside, the auction, the raffle, the fighters sponsorship money…..you get the drift.

White Collar Boxing it’s called and it has been on the go for around ten years, but as I watched fight after fight, I was compelled to make a few phone calls from the venue. “We can do this” I insisted, knowing that the trust board would take it and run with it. Players and supporters uniting to put on a show and help Glentoran Football Club keep its head above water. “But this ain’t no playground” and every fighter who would commit to fight would be compelled to undergo six weeks intensive training with the pro coaches at Monkstown Boxing Club.

So, on a coldish sort of evening after work at the end of March we gathered in a highly impressive Amateur Boxing training facility off the Doagh Road on the outskirts of the city. The initial euphoria at having a ready built pool of talent had waned as the numbers of those committing to fight had dropped away for one reason or another. We debated scrubbing the idea, but twenty minutes into that first session those who were dedicated to making this work, the lads who were going to fight, had forced us into a re-think. This was serious training, full on teeth clenching, sweat soaked beasting… and the fighters seemed to love every minute of it. 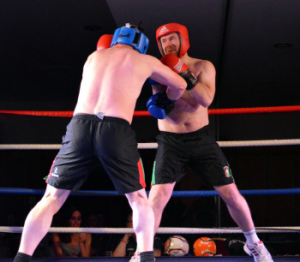 “Seconds Out!” Tim McCann and Mo Kitchen get stuck in …

Our roster read as follows, from our first team, Stevie Gordon, Jonny Addis and Jay Magee, from the Seconds Squad Dickson Chisanga and Kyle Mackie, from the Glentoran Legends Tim McCann and from the terraces of the Oval, Johnny Poots, Mo Kitchen, Stephen Beattie and Graham Childs. I spoke to Tim during a break in the training. He was so fired up it was impossible not to get caught up in the whole hoop la of what it means to be a true, genuine, card carrying Glenman. Behind the scenes, we had managed to book the venue The La Mon House hotel and with a considerable amount of help from our former chairman Terence Brannigan a number of high profile sponsors for the evening. A number of local businesses supported the event as well and by 7.00pm on Thursday 15th of May. 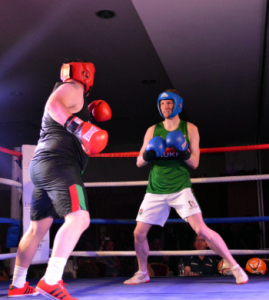 Tension backstage was palpable, as table after table filled with supporters and the music filtered down the corridors and into the dressing rooms. White Collar Boxing, the event promoters do this properly, professional ring men, card girls, referee, doctors, light shows, video screens and a screaming soundtrack. The lads who committed to do this were , as the clock counted down to show time left in no doubt as to the seriousness of what they were about to do…  and with a booming “Ladies and Gentlemen, let’s get ready to rumble” from Cahal, the MC, we were off!

I’m not gilding the lily here when I say that I’m in awe of this particular group of people. From a players perspective if any of the lads who stepped into the ring ever need anything from the membership of the GCT they are pushing an open door, because once that bell rang, in every fight including the main event, (a heavyweight contest between Jonny Poots and the imperious big Stephen Beattie who won’t mind me saying that he has rounded Cape Fiftysomething) the fighting was ferocious, blood spatter the canvas and bones cracked… all in the name of Glentoran Football Club. Dickson Chisanga was aware that he would be leaving the Glens the week after the fight but carried on meaning that both he and Kyle Mackie raised a total for provision of Seconds playing strip, when topped up by the Glentoran Community Trust, came to £1,000. 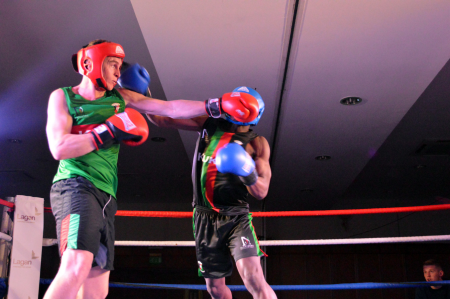 The dressing room after every bout was the place to be as fighter after fighter almost collapsed through the doors. The doctor checking over cuts bruises and noses that may well have looked a lot different than they had the night before. Some said it was the hardest thing they had ever done, the usually unflappable Beattie remarked that he has never been more nervous in all his life. But the big winners on the evening were the charities whom the fighters had undertaken to represent, a combined total of over £4,000! Organisations benefiting were Jointz (a children’s arthritis charity), The Chest, Heart and Stroke organisation, Bandanas for the Brave (a children’s cancer charity) Helping Hands (a children’s autism charity) and the Trust’s dedicated charity partner Survivors of Suicide, which remains a very personal cause for all of us in east Belfast. Few people could not have been moved by lifelong Glenman Bobby Cosgrove’s moving speech half way through the proceedings. 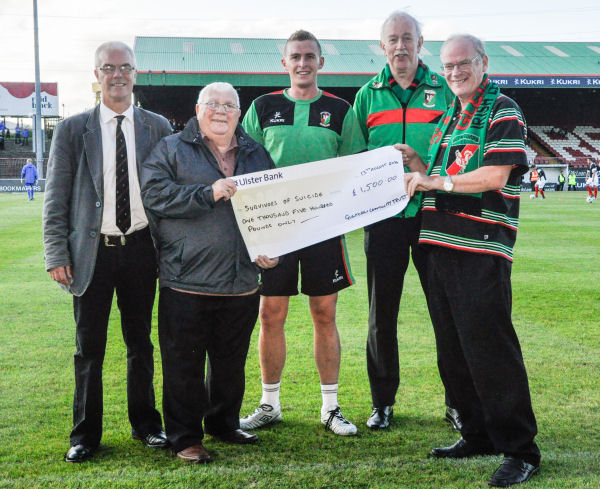 The night in essence was organised by the Glentoran Community Trust to help the Glentoran manager with the management of resources, and to that end the Trust are delighted to have been able provide £6,000 to assist Eddie in securing of the services of both Barry Holland and Kym Nelson, and indeed we’re prepared to foot a further £2,000 if the manager had been successful in securing the services of Cairan Caldwell.

This work will continue as a result of the efforts of all those involved in the very first “Irish League Fight Night” and we as members of the Trust and supporters of the club cannot thank enough all those who fought, all those who came, all those who helped out and all those who sponsored this unique event. Look out for the next Glentoran Community Trust big night coming soon.