Heroes for one more day – by Philip Stevenson 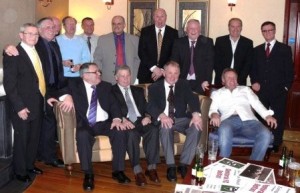 Last Saturday evening the Glentoran Community Trust hosted a special re-union at the Park Avenue Hotel. The function, doubling up as a special launch night for the Trust’s new production “A European Dream DVD” helped mark the 35th Anniversary of Glentoran reaching the Quarter Final of the European Cup Winners’ Cup, where they faced the crack West German side Borussia Moenchengladbach.

Before the main function, quite a few months research paid off as 14 of the 20 surviving members of that squad from 1973-74 met up again in the Park Avenue’s Aldorf Suite for an informal re-union prior to the main function in the Oxford Rooms.

First to arrive on the night was the one who had traveled the furthest to be there, centre half Billy Walker, who had flown from Canada along with his wife Adrienne. Soon after he was joined by old friends Jim McIlwaine, Rab McCreery and John Anderson. More and more star names from the past started to enter the room, with Billy McKeag, Billy McCullough, Jim Weatherup joining the reminisces of the past before being joined by former defender Geoff Gorman, goalkeeper Trevor McCullough and the man never short for words, Warren Feeney.

As they autographed various photos and books other legends joined them, Tommy Craig, Alan Paterson, and Andy Dougan, and finally Johnny Jamison completed the line-up.

The craic began to fly as stories of matches, trips abroad and certain incidents flew. Goals from ten yards suddenly became 20 yard screamers as each player told stories that over the years seemed to have more and more added to them like fishermen recounting tales of fish that they had caught.

Once the official photos were taken the Legends wives and guests were shown to their tables before each Legend of 1973-74 were announced into the main function room one by one. Most, if not all, had changed quite a bit from their photo that was flashed unto the big screen as they entered but that did not matter to the 200 odd guests in the Oxford Rooms, each Legend received a well deserved round of applause as like returning heroes they crossed the floor to line up again as a team for one more time.

Once assembled together again as a team, the returning Legends were then asked a series of questions to give the audience a taste of just how they achieved their miraculous feat. In turn they told their stories of the many games and tragedies that happened along the way on their journey to the Quarter Finals.

Alan Paterson recounted his feelings as a raw nineteen year old keeper in the First Round games with Chimia of Romania, then Billy Walker told of his dramatic equalizer in Brann Bergen whilst graphic photos helped Rab McCreery tell the tale of how he had broken his leg that night in horrific conditions in Norway.

Warren Feeney and Johnny Jamison retold tales of their goals scored along the way as Glentoran became the sole British survivors in the competition whilst Billy McCullough, the captain of the side, told his pride in the achievement of the side considering the sad loss of four players that season through broken legs and also the sad death of Roy Stewart after the home game with Borussia.

The most poignant part of the evening befell to Jim Weatherup who gave an emotional account of the loss and impact of Roy Stewart’s untimely death within hours of playing a usual large part in Glentoran performance in the home leg against Borussia Moenchengladbach.

Some e-mails from absent Legends John Hill, Roy Walsh and Peter Dickinson were read out before the formal part of the evening ended and the night was then turned over to the excellent local band Ballroom Blitz who played out the evening with the sounds from the seventies.

All in all a wonderful night of nostalgia and one that will live long in the memory for all those who where there when the Heroes of 1973-74 became heroes again for one more day.