During the weekend of October 7th 2007, Glentoran Community Trust engaged in a number of events to mark the 125th birthday of Glentoran Football Club and it’s 125-year asociation with East Belfast. Culminating in 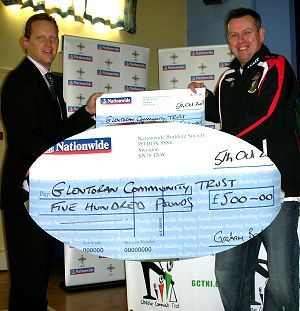 the GCT Community Festival in Ormeau Park Belfast on Sunday 7th October, the following pages will give you some idea of how the weekend events unfolded.

Nigel Worthington
The party weekend kicked off bright and early on Friday morning 5th October with the Glentoran Community Trust hosting a “meet the manager” question and answer session at St Colmcille’s Parochial Hall at Ballyhackamore. Around one hundred children from St Joseph’s Primary School and Nettlefield Primary School in East Belfast lined up to ask Northern Ireland manager Nigel Worthington a number of probing questions. In fact the kids went further than either Mark Sidebottom (BBC) or Adrian Logan (UTV) was prepared to go!

It was the first time that the two schools had come together and the Glentoran Community Trust were delighted to host the event with the assistance of Mr Ryan and Mr Todd, the respective principals, and Father Delargy the parish priest.

Worthington was pushed on his thoughts on the inclusion in his squad of Irish League players and Gary Hamilton in particular. The manager’s response was tepid but remarkably within a fortnight Glentoran’s star striker was boarding a plane for Stockholm.

The Trust would like to acknowledge the input from the Glentoran Community Initiative in the event and also to Nationwide who flew the Northern Ireland manager especially to meet the children. The GCT would also like to thank Nationwide for the donation made to our Supporters Trust by the Building Society.

The lads in the band love this gig, their music is the music that many of us grew up following the Glens to.

“Buck” the band’s lead singer tells us that he has never seen a crowd as up for a good night as a Glentoran crowd. His text at lunchtime next day asked us “When’s the next one?”

At around 1.30am on Saturday morning I passed Arnold’s chip shop at Ballyhackamore. There, lined up waiting for their burgers and chips were two girls and two fellas all wearing a fez!!

Paul Leeman Testimonial
Jammed in amongst all the mayhem was Glentoran skipper Paul Leeman’s testimonial dinner at the Stormont Hotel on Saturday evening. Another hugely successful, well organised function which Paul richly deserved. The guest speaker Neil “Razor” Ruddock an enlightening and colourful character by all accounts.

GCT Community Festival
Sunday morning arrived way too quickly though. The Festival had been a year in the making. None of us had ever paid too much attention to the long range weather forecast but in the week running up to the event it was the subject of numerous texts. We were spinning a number of plates to get the event on and over safely. Everything from £5 million public liability insurance, a formal parade application through the Parades Commission, a 40’ articulated lorry for the stage, three bands, a skydiving team, sumo wrestlers, bucking broncos, fire jugglers, stilt walkers right down to the Blanch’s early morning toilet inspection which revealed that one of the Portaloos wasn’t working.

Again the Festival could not have happened without the help of the numerous volunteers who turned up early on a Sunday morning to steward the event and in the case of Gil to keep proceedings ticking along.

We would like to thank you all. There are things you don’t project for. Uninvited vendors, inflatable rides that only appear at the last minute, generators that don’t generate but somehow through the hard work of all involved, the parade comprising of all the Glentoran teams snaked into the Park right on cue.

The decision to parade from Nettlefield was taken to mark a number of historical references which relate to the formation and early years of Glentoran FC. Nettlefield was the area from which one of amalgamated sides emerged, My Lady’s Road the location of the first headquarters of Glentoran Football Club, Ballarat, Dunvegan and Bendigo Streets now stand where once Glentoran House overlooked Ormeau and as the parade proceeded along Ormeau embankment it passed over the Glentoran River.

The community around the parade route bought into the event as well decorating My Lady’s Road with flags and bunting whilst bars and cafes decked out their premises in Glentoran colours.

We were delighted to be joined by the Rev David Thompson, club chaplain to Glentoran Football Club who opened the event with a prayer, his words setting the standards for a moving day.

With one of East Belfast’s oldest and most famous bands The Regal introducing the sides Philip Stevenson single-handedly brought the 36 Glentoran Legends and the two former managers together for the opening game. Philip’s planning was meticulous and he should feel hugely proud of an achievement was saw many great names pull on the red, green and black for one last time. One of the participants tells me that the dressing room team talk was deadly serious with huge bragging rights at stake for the winners. Billy Caskey still maintains that he has never played in a “Friendly”!

With one eye on the skies all morning we finally received an assessment form the Wild Geese Ground Crew that whilst the conditions were borderline in Belfast the aircraft could not get clearance to take off from Garvagh and so the Free Fall display failed to materialise.

Later than planned we finally made it into the Nettlefield dressing room. The laughing had stopped and it had been replaced by a deathly silence. “This seemed like a good idea at the time” was the only comment anyone could muster. Out in the corridor the size of the crowd outside was making it debatable for at least one participant as to whether he played or not. And then Jimmy Brown arrived. His “Let’s get into those so and so’s (edit)“ speech lightening the mood considerably!

If you have read the Festival Programme you will be aware how much playing in red, green and black on the site of the first Glentoran game meant to all those supporters who signed up to play. Roy France had travelled from Sheffield, Bill Jordan from Manchester, lads between the age of 17 and 55 all out to mark the occasion for posterity. Two all time greats Sammy Lowry and Sammy Hughes lined up for one more time to kick off for the Glens. It’s a sight that I for one will never forget.

There were other sights on the other hand which will be hugely forgettable. You wonder what Victor Coates would have made of it all. Game over with Oakfield 4-1 winners over Nettlefield and it was a pleasure to have brothers George and Damien Silo and their two children Oliver and Niamh as guests of honour to present the Victor Coates Trophy and the medals to the participants. Oliver and Niamh are direct descendants of George and Modesto Silo, Modesto who played in that very first game 125 years ago and George who lead the Glens to our first championship victory ten years later. We have kept in contact with the Silo family ever since we interviewed Damien’s father also George only weeks before he passed away last season. They were honoured to be able to take part in the proceedings.

The day was full of hugely significant events, Cleary, Hughes, Lowry, Jamison, McCreery, Blackledge, McKeag, Jameson, Leeman, Nixon, Robson and Neill amongst others all together on the most memorable of days.

As you can imagine, a huge number of photographs were taken before during and after the Glentoran Community Trust Festival at Ormeau Park on Sunday 7th October 2007. When we sat down to work our way through them there was one theme which ran through the many pictures (be they Tommy’s, Wilbur’s or Russell’s). In almost every photograph there were people laughing.

Glentoran supporters have had little to laugh about over the last couple of years, but on that Sunday it’s fair to say that you couldn’t help stifle a chuckle. Roy Coyle and Jimmy Brown in Victorian costume, Caskey and Blackie trying to assassinate each other, oh and it would be remiss of us not to mention “that” miss.

Over 1000 views on Youtube and rising. With the big lad working in the Post Office he has already written his own headline …
“Second Class Beattie fails to deliver!!”

The Ballymac
I never thought I would see Ronnie McFall and his wife back having a drink in the Ballymac at the post match party, John Devine talking to Nuts, Darren Parker to Billy McKeag, Johnny Jameson and Johnny Jamison signing countless autographs.

The auction at the club was nothing short of unbelievable and over the next days and weeks the Trust would be able to announce that over £5,000 would be winging it’s way to local charities and good causes as a result of the days proceeds!

The Glentoran Community Trust owes a massive debt of gratitude to a large number of people including our sponsors, volunteers, participants, officials, Belfast City Council and to the Lord Mayor for his attendance, the PSNI, the community around the Lagan Village, the press, Colin Story, Dessy and Declan at Quinn’s, Roy Miller, our shirt manufacturer and to the management and players from all the Glentoran teams.

Primarily though we would like to thank the vast numbers of Glenmen women and children who joined us to celebrate our birthday.

When the crowds abated we returned the Park to its original condition clearing the litter and dismantling marquees. Over the next month or so we will fulfil our promise to carry out a tree planting ceremony at the Park with the children from the two schools in a bid to leave a lasting legacy of Glentoran Football Club at Ormeau.

As we took down the tents a youngster who was kicking a ball about on the pitch asked us “When are youse having the next one?” Well son, that’ll be the 7th October 2032 and if any one of us are there it’ll be with a flask and a tartan blanket and they’ll still be looking for the ball that Beattie skied over the crossbar !!