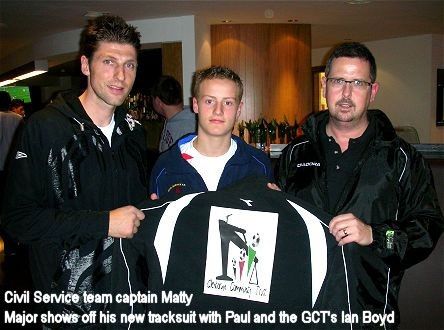 Glentoran Community Trust are delighted to announce a deal to sponsor Civil Service FC Youth Team. For the first time in their history Civil Service Football Club have a youth team which plays home games at Stormont in the South Belfast Youth League. The link – all 19 registered players, Manager, and 3 coaches, are all members of the GCT, and also make their way to the Oval for every Glentoran home game.

The boys play at a very high standard and hopefully in the future we will see some of them pull on the famous red, green and black. On Wednesday 24th Oct the GCT’s Jim Welsh, Ronnie Hoy and Ian Boyd were joined at the Maynard Sinclair Pavilion at Civil Service, Stormont, by Glentoran captain Paul Leeman who proudly presented the players with new GCT commissioned tracksuits. Civil Service FC Youth Manager Billy Irvine whose company Bloomfield Fuels are the teams other major sponsor said that he was absolutely delighted with the Trusts fantastic gesture, and also thanked Paul Leeman for taking the time out to do the presentation on behalf of the GCT, and meet all the boys. It was clear to see everyone was delighted with their new gear and the fact Paul presented it to each and every one of them.

The GCT would add a big thank you to Paul for once again taking time out of his busy schedule. 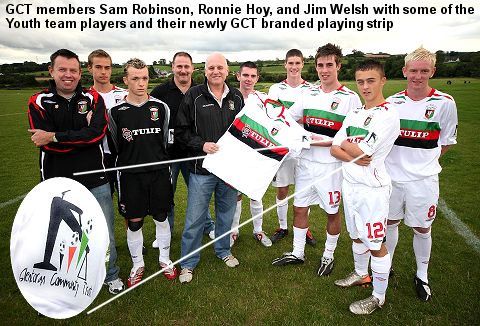 The membership of the Glentoran Community Trust today announced an innovative sponsorship package for the Glentoran Under 16 and Under 18 sides. The GCT is now one of only a handful of Supporters Trusts in the UK who have moved to sponsor the shirts of the youth squads of their Club.

Both Glentoran sides will carry specially commissioned GCT sleeve patches on their team shirts for the 2007/08 season in an effort to promote the work of the only Supporters Trust in N Ireland at Glentoran youth level. The deal will allow the sides to subsidise the costs of training gear to the young players before the start of the forthcoming season and comes as a result of a proposal laid before the Trust board by Trust member and Under 16 coach Nigel Matthews and general youth manager Stephen Lowry.

The project has the support of the Chairman and Board of Directors of Glentoran Football Club.

Many Supporters Trusts in the United Kingdom aspire to involve themselves in work such as this and the GCT board see the venture as possibly the start of an even bigger involvement with the Glentoran Academy as a whole.

The return for the Trust is an increased profile as it continues to highlight the benefits of Supporter’s Trusts to Irish League Clubs, the Department of Culture Arts and Leisure, and to the Irish Football Association.

Both Glentoran FC youth team squads will now also become members of the Glentoran Community Trust, increasing the youth membership of the society.

The shirt sponsorship deal comes hot on the heels of the £3,000 raised by Glentoran supporters through the Community Trust for the Glentoran Academy in Ghana, and the £3,500 raised by the GCT to assist with the TorBank Mini Bus Appeal fund. All this in less than a six month period!