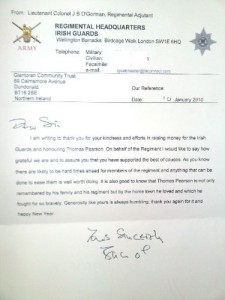 It’s hard to get your head around this but these pictures tell the tale better than any words can.

Six weeks ago The Glentoran Community Trust commemorated one of our former player’s heroism during the Second World War.
Thomas Pearson our goalkeeper from 1937-1939 was killed in action in North Africa three weeks after he was awarded the Military Medal for valour under fire.

As part of the celebrations the GCT undertook a project on behalf of Thomas’s regiment The Irish Guards. We agreed to try and put together some parcels for members of the regiment currently deployed in Afghanistan.Our target between the 1st October 2009 and Christmas Day was 200 shoe box sized packages.
Today 53 days into the appeal we have received, packed, processed and delivered some 1,400 Parcels.
Many, many of you have brought gift items to both our home games and to the Glentoran Superstore in Connswater along with numerous other collection points which have sprung up around the province. We have also at the time of writing managed to raise £3,000 for the regiment’s dedicated fund helping soldiers who are injured whilst deployed in the region.

The men and woman on op Herrick 11 who have been in receipt of your kind donations have asked us through the site to wish you all a very Merry Christmas and a Happy New Year and to thank you for your wonderful kindness and support.
So what of all your sweets, crisps, shower gel, books, sun cream, hair gel and magazines? Well, we think it’s best to let these pictures do the talking.
As Glentoran Supporters you should be immensely proud. 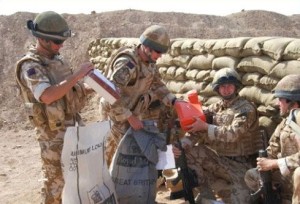 Glentoran Community Trust has this week been nominated for an award as part of the newly instigated Royal British Legion’s Friends of the Forces Awards.

This is an awards event set up by the Royal British Legion with the support of HRH Prince Harry of Wales .

The Friends of the Forces Awards recognise and thank members of the British public who contribute to the well-being and appreciation of the Armed Forces.
We have been nominated for the regional finals of the awards with success meriting inclusion in the National Awards which take place in London on the 13th July 2010.

The nomination on behalf of the GCT has been submitted by Capt J Donaldson 1st Battalion Irish Guards who co-ordinated the massive GCT Home Comforts appeal which saw Glentoran supporters, collect, assemble and dispatch almost 1,600 comfort parcels for soldiers serving with the British Armed Forces on Op Herrick 11 in Afghanistan between Oct 2009 and March 2010, and for the Trust’s efforts in raising funds for the Irish Guards dedicated Afghanistan Fund being used to assist with the rehabilitation of injured guardsmen during the conflict.

Captain Donaldson stated that he was so impressed with the effort, and dedication which had gone into the operation and the positive effect it had on the soldiers receiving the parcels that he has had no hesitation in nominating the GCT and its members for this award.
We will of course update with any further developments.