HOW THE EAST WAS WON 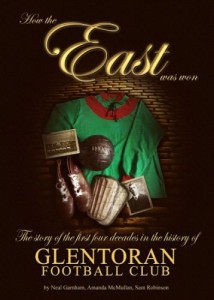 Well that’s what we should be singing today, at Windsor Park on Boxing Day and on every other occasion when we as football supporters feel the urge to break into song.

Had it not been for the determination and the dedication of a small group of supporters our club would not exist, committed to the annals of history like so many other football teams that would fall by the wayside in the first formative years of the Irish Football League.

Where are they now? Oldpark, Mossley, Ulster, Sydenham and Wellington Park?

They too formed up in the late 1800s just like the Glens but something special was to set Glentoran Football Club apart from the others. Both geography and the calibre of the people who brought the club into existence would see the Glens survive well into a second century.

Avoniel Distillery was the glamour side in East Belfast in 1882. The formation of Glentoran Football Club hastened their demise.

“How the East was won” is a social history book which explores the creation of “The Glens” in Victorian Belfast charting the events and characters who took the club from park life to European glory in just forty years.

Written by Dr Neal Garham, Amanda McMullan and Sam Robinson the 80 page publication explains how and why Glentoran came into being and looks at some of the strange and intriguing characters who made the Glens the pride of East Belfast. English McConnell, Ching Morrison, Modesto and George Silo would all have a part to play.

How The East Was Won is produced in association with the Glentoran Community Trust.

The book is a limited edition, once sold out there will be no re-print. 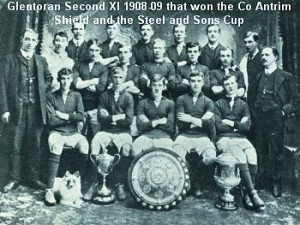 Update – 18th April 2010
Last week Glentoran Community Trust continued to roll out our “How the East was Won” project by presenting the history department of Royal Belfast Academical Institution with fifty copies of the book which was written by Sam Robinson of the GCT and Dr Neal Garham from the University of Ulster. The Trust membership also produced and published the work which highlights in detail the development of Glentoran Football Club within the context of the expansion of Belfast as a city between 1882 and 1922. We are delighted to announce that the book is now being used as a teaching aid in the History department of both RBAI and Ashfield Boys School in Belfast and at Freudenberg High School near Frankfurt in Germany as part of the Titanic Schools project. This element of the project will develop further with the work due to be sent to schools both in Lille, France and North America in the next few months.

The book was presented to R.B.A.I. as part of a special assembly during which Glentoran centre forward and Inst old boy Michael Halliday addressed the school talking about his schooldays, his life and his career at Glentoran. 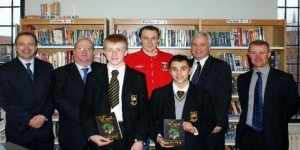 Many thanks to everyone for your continued support.