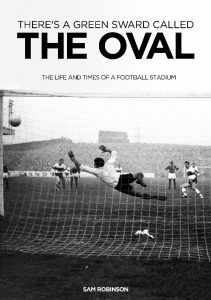 Six months ago I found myself down at the Oval football stadium on a perfect sunny evening in late May. I was responding to a plea made to supporters by the groundsman to help him water the pitch. The kind of thing you don’t get to do at the Bernabeu.

After a time, whilst standing out in the centre circle watching the sun lighting the drops of water falling onto the pitch, I got a bit lost in reminiscing about all the days and nights I’d spent down here and of the good times and not so good I’d shared with everyone who has gravitated just like me, down Mersey Street and through these turnstiles over the last half a century.

I know that someday this old stadium won’t look like it does now and that all there will be left will be memories and stories. So I decided there and then to write a book about the place. The Oval itself. I got to thinking that if the old ground could talk what would it say? When I did, I had no idea about what I’d find in amongst terrace, stand, concrete and steel. This is story of how the Oval came to be, what happened within these walls, on this pitch and of many of the people who kept its heart beating, became compelling. 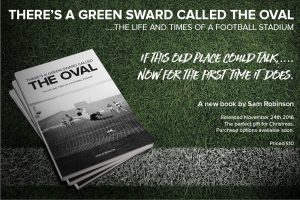 The wealth of stories un-earthed meant, that a project I had planned to jump in an out of now and then became an obsession. One, which I have completed and which will see the book published on the 24th November 2016.

I thought I knew a lot about this place and the stories within, but I knew nothing. There’s a Green Sward Called the Oval, (the title taken from the first line of the great old poem “The Famous Sammy Hughes) has been a revelation and an absolute labour of love. The story of the Oval and of its people is one of perseverance, foresight, tragedy, murder, political intrigue, community spirit, civil unrest, war and peace, highs and lows, and success against the odds.

The book is set to launch at a number of events in November and December. Despite a lot of advice to the contrary from the professionals, I have kept the price of what is a compilation of over 72,000 words in addition to 64 pages of photographs (some of which have never been seen before) to just £10.

I am only commissioning one print run of the book.

This is a publication that in my opinion every supporter should possess as a reminder of how the Oval came to be and how it served its people and as a memento for when finally, the last ball is kicked on the green sward called the Oval.

So, if you want to know where some of the guns from the Clyde Valley were hidden? where the Detroit Cougars purchased their Panama hats? who designed the Glentoran badge? What it was like on the nights when Benfica and the Rangers came to town? what was to befall 786 people travelling to Belfast outside the stadium on a misty January morning in 1945? How it felt to stand on the terraces on Morgan Day or why a family of French gypsies appeared at the Oval in 1894? well it’s all in there, amongst a myriad of other tales.

There’s a Green Sward Called the Oval is out in time for the Christmas market and would make a great gift for the Glentoran supporter in your life or for those with just a love for the game, or with an affinity for the east end of the town

You have 2 online purchase options below – ‘Collect’, or ‘Delivery’.

Buy and Collect – PRICED £10 – Simply pay online and we’ll update you with collection details after 24th November. Otherwise contact us after that date and arrange to collect personally: Ph – 07725 211668, email info@gctni.com

Price (including p&p) AUSTRALIA AND NEW ZEALAND ONLY £24.00

Please contact us at info@gctni.com for any queries, and for delivery costs to Rest of the World.